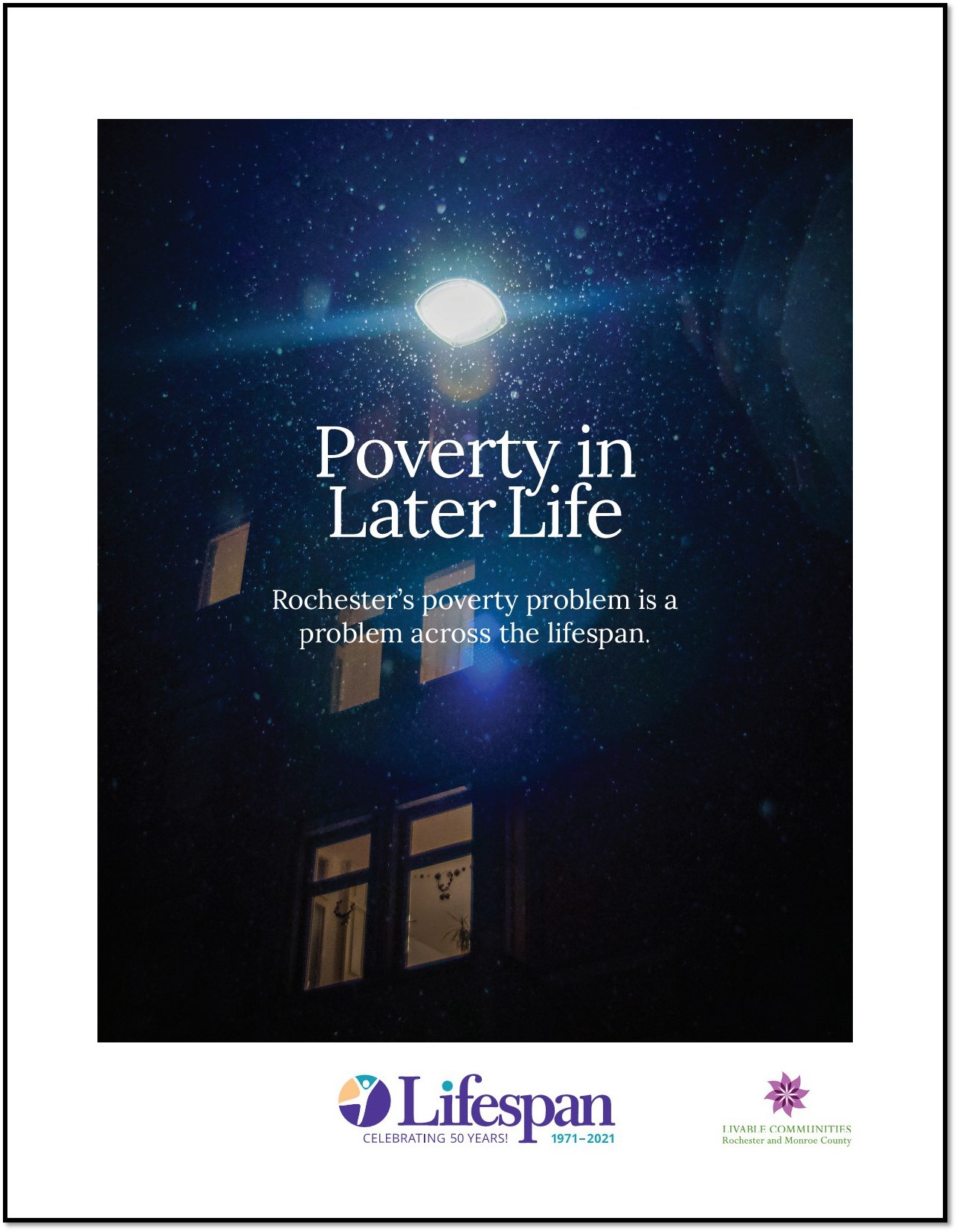 The inability to meet basic needs among older adults is hidden and rarely acknowledged even though a significant number of older adults in the City of Rochester are living in poverty. This report, Poverty in Later Life, summons your attention to the lives of Rochester's older residents who struggle to survive in their 60s, 70s, 80s and 90s. Our intent is not to pit old against young but to cast light on poverty across the lifespan.

The Rochester-Monroe Anti-Poverty Initiative (RMAPI) is an unprecedented community-wide effort to reduce poverty in the Rochester and Monroe County region by 50 percent over the next 15 years. This initiative involves the efforts and input of nearly 1,000 people in the region,including more than 200 volunteers on committees and workgroups, more than 800 community members who attended a town hall meeting or have participated in surveys, and most importantly, the people this initiative is intended to benefit - individuals impacted by poverty. In September 2015, the Initiative released "Progress Report: A Roadmap for Change".

The City of Rochester, in partnership with the Rochester-Monroe Anti-Poverty Initiative, is focusing resources to address poverty within a targeted geographic city location, the Pathways to Prosperity District. In collaboration with the Flower City AmeriCorps, the Office of Innovation designed and implemented a door-to-door survey in order to build on previous public outreach efforts and better understand residents’ needs and concerns regarding neighborhood services and employment barriers. More than 400 people were interviewed for this survey, and the results are published in the Pathways to Prosperity Report. The results can also be reviewed through this Interactive Data Dashboard.

In January 2015 ACT Rochester and the Community Foundation released a report: Benchmarking Rochester's Poverty: A 2015 Update and Deeper Analysis of Poverty in the City of Rochester as a companion and update to the 2013 Special Report on Poverty. The report also compares poverty data based on gender and race, educational attainment, disability, employment, age, and family size and income.

The concentration of Rochester's Poverty was highlighted in a Century Foundation study out of the Center for Urban Research and Urban Education at Rutgers University. A synopsis of the study is available here.

In December 2013 ACT Rochester and the Community Foundation released a Special Report: Poverty and the Concentration of Poverty in the Nine-County Greater Rochester Area. This report became the foundation of much of the work to follow regarding the Rochester-Monroe Anti-Poverty Initiative. The Report found that Rochester is:

Click on the cover to read the full report .
Poverty Simulation

This simulation is a highly interactive experience that facilitates awareness of what a typical low-income family experiences in their attempt to survive from month-to-month. Each participant assumes the role of family member living in poverty for one month. The exercise runs for approximately 3 hours, and is coordinated and hosted by CCSI: Coordinated Care Services.

Subscribe to our mailing list to receive notice of the next Poverty Simulation.
Check out a video of CCSI's recent workshop!
Indicators
Filter
All poverty Indicators
Search